It has been a while since my last post, it seems that Christmas took over my life! Not sure what I did when I was working full time but I didn't seem to have any time this year! Probably just lack of organisation, must write more lists next time! But there was a lot of Christmas baking done and here follows the pictures to prove it. 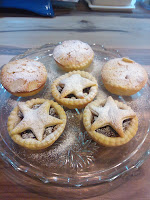 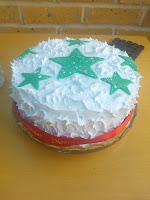 My christmas cake (one of four that I made, the other three went to good homes) with royal icing and green stars. Still have half left but it will go down quickly enough. 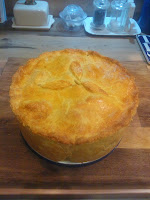 Christmas dinner pie. This had all the leftovers within - turkey, stuffing, sprouts, cranberry sauce and topped with roast potatoes. A fine way to use up the leftovers. 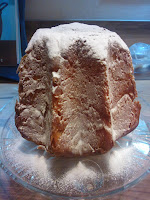 This is the Christmas bake I am most proud of, a Pandoro. This is Verona's version of the Panettone. It is a cakey bread flavoured with vanilla. It took about 36 hours to make but it was worth it. My sister in law sent me the recipe from Italy, in Italian! It had lots of pictures and with the help of Google translate I managed to decipher it. It turned out well in the end although I haven't tasted one before so not sure if it was authentic but it did the trick and didn't last very long. I made another one which will be going into bread and butter pudding this very evening.
So, there is a roundup of my Christmas activity. Happy New Year one and all and more baking and knitting on its way in 2014.

Posted by Cakes and Cardies

Books You Will Love